At the height of the historic storm, 210,000 members of multiple electric cooperatives in Georgia were in the dark after the crippling storm damaged transmission lines and substations that had to be rebuilt before crews could restore power to individual homes and businesses.

In Diverse Power’s Pataula District, service was knocked out for approximately 5,500 of the area’s 6,000 meters.

“Out of 11 substations at Pataula, only one had power to it, so those 500 meters were the only ones not affected,” says Diverse Power Senior Vice President/COO Randy Shepard, noting that about 1,000 consumer-members in the co-op’s northern service area lost power, “but all of that was back on within 12 hours.

It was a different story at Pataula where power lines floated in swamps, wire was tangled in trees and lines were draped across roadways where vehicles couldn’t pass.

“We replaced about 80 poles that were broken, and we can’t even estimate how many miles of line were on the ground,” says Shepard. “There were homes, timber and a lot of crops destroyed. I saw a huge fifth-wheel motor home rolled over on its side. A lot of us had never seen this kind of damage. It was the worst I’ve seen since I’ve been here.”

“The first two days, crews were getting lines up but not seeing lights because the transmission was down,” says Shepard, noting that Georgia Transmission Corp. crews worked to restore transmission lines while distribution co-ops, like Diverse Power, repaired lines to homes and businesses. “You usually don’t have transmission out, but this was such a rough storm, it wreaked havoc on transmission, too. It was a long, arduous process to get it all straightened out.”

Linemen from assisting co-ops slept on cots at the Pataula headquarters in Cuthbert, according to Shepard, who said sleeping arrangements improved as power was restored at local hotels. Linemen and right-of-way workers who put in 16- to 18-hour days were thankful for sleep wherever they got it. For the first five days of restoration efforts, LaGrange-based employees delivered meals to Cuthbert twice a day.

“There was nowhere open to get anything down there,” says Shepard. “We hauled breakfast biscuits and sack lunches in the morning, leaving LaGrange before 5 a.m. to get meals to crews before they left out. Then we came back to LaGrange and hauled hot meals down for the evening. It was a challenge logistically, but everyone stepped up to make sure everyone down there had what they needed.” 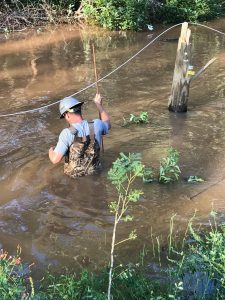 Diverse Power and assisting crews battled all sorts of obstacles while restoring power following Hurricane Michael, including wading through swamps to repair lines.

In all, 150-175 Diverse Power and assisting linemen worked day and night to repair the electric system at Pataula. By Oct. 18, one week after the hurricane hit, power was restored to all Pataula District members, according to Shepard, who says several Diverse Power linemen immediately headed south that same day to help Three Notch EMC restore power in Colquitt and Damascus.

“Some of the crews that helped us went there with us, plus Alabama crews from Clarke-Washington EMC and Coosa Valley Electric Co-op,” he says. “It’s the cooperative spirit. As soon as we were back up, our guys were ready and eager to go help someone else.”

“Their patience, support and willingness to help were just fantastic,” he says. “There was virtually no negativity. All we heard was ‘thank you.’ It was incredible.”