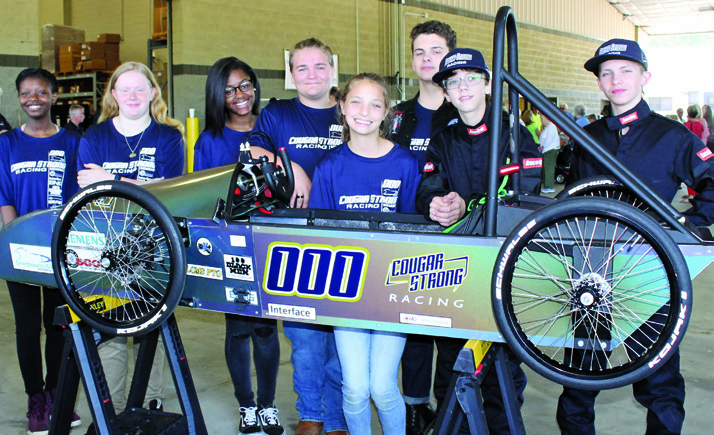 Long Cane Middle School seventh-grader Summer Horne has been working with her father on car maintenance for years. When she learned last year that she could transfer the knowledge she had gained from her father to the classroom, she signed up for the GreenPower Tech class and became part of the school’s Cougar Strong Racing Team.

The GreenPower Tech course teaches STEM (science, technology, engineering, and math) skills that expose students to engineering and innovation by having them work as a team to design and build from scratch a single-seat, battery-powered race car. Troup County School System’s three middle schools each introduced the GreenPower Tech course, a semester-long elective, last fall to incorporate STEM principles in the classroom.

In April, Horne and her team-mates proudly displayed their race car in the lobby of the school system’s administrative building and spoke at the Troup County Board of Education’s monthly meeting. They again shared their experience in May when they addressed more than 1,000 people at Diverse Power’s Annual Meeting, telling co-op members that working on the car was “one of the coolest things” they’d ever done in school.

Students take engineering concepts and learn how to make custom parts to fit the needs of their vehicle, according to Matthew Graham, Long Cane’s GreenPower Tech instructor.

“If something is not working, they have to figure out how to make it work properly,” says Graham. “This is truly a student-led course, and I am there to facilitate and help them through any problems.”

Students start with a steel frame that comes in a kit. After working about six months to build their car, the 15-member team was able to race it against other middle school teams in a NASCAR-style environment. At their first meet last spring, they came in second place.

“We had to raise money to buy parts we needed, we had to use teamwork and work together, and we had to build our knowledge so we could make changes where they needed to be so our car could out-last the other cars in the race,” says Walker Graham, Long Cane eighth- grader and leader of last year’s Cougar Strong Racing Team. “We are very proud about what we have done in just one year.”

And they should be. The team came in first place last spring at the Grissom Grand Prix in Huntsville, Ala., the biggest GreenPower race of the year, according to Matthew Graham who says Long Cane’s team competed against 28 other middle school teams in two heats.

“We beat them all,” he says. “We came in first place for the race, log-ging 34 laps on the mile-long track, quite a feat as most of the other teams were veteran teams. Of the 90 minutes in the race, it took Chloe Morris just 18 minutes to go from tenth place to first, and our drivers held that lead for the remaining 72 minutes of the race.”

The instructor further noted that the Cougars had no mechanical failures or issues during the entire race.

“That’s a testament to our pit crew doing a fantastic job preparing the race car,” he says.

As the parent of a racing team member, Wayne Webb appreciates the new program. His son, Kevin, is an eighth-grader at Long Cane and a team driver.

“This teaches the kids a lot about responsibility and helps them learn teamwork,” says the dad.
“The kids are all really into it and had a ball building and racing the car.”

Gaining additional STEM learning they can take into high school is sure to benefit the team members, including Horne, who hopes to one day work as an engineer.

“I have always been interested in working with my hands and building things,” she says. “Taking this class and being a part of this team has helped a whole lot.”